VIPs, including the Environment Agency chief executive Sir James Bevan, attended an open day to see the latest work on the flood defence scheme, which will significantly reduce the risk of flooding for 2,000 homes and businesses in the town. 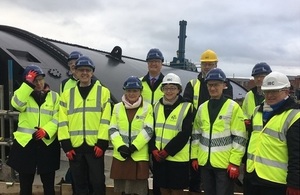 VIPs, including the Environment Agency chief executive Sir James Bevan, attended an open day to see the latest work on the flood defence scheme, which will significantly reduce the risk of flooding for 2,000 homes and businesses in the town.

The 200 tonne tidal gate was manufactured in the Netherlands and arrived in Suffolk in October, a significant milestone in the 4 year project. The gate is 22 metres wide and will stand 9 metres tall when in its “closed position”. It is finished with 5 tonnes of special paint that will help protect it, as it spends most of its life under water.

It was lowered into place by a specially constructed 1,000 tonne crane and the operating mechanism and control building are now being installed.

The project is being undertaken by Environment Agency contractor VBA – a joint venture between VolkerStevin, Boskalis Westminster and Atkins – and is due to be completed next year.

Its been fantastic to visit the Ipswich tidal barrier gate and see this incredible feat of engineering. The £70 million barrier will not only help reduce the threat of flooding for 2,000 homes and businesses but also be a boost for the area’s economy. Working with partners has been key to the scheme’s success and I look forward to seeing the finished scheme.

Suffolk is no stranger to flooding and the devastating impacts it can have. That is why I am really pleased that we have made progress with this scheme which is a key part of the regeneration of our county town.

This new £70 million barrier is brilliant news for Ipswich and is just 1 example of our investment across Suffolk to better protect communities across the county from flooding.

The final element of the scheme involves building a tidal barrier across the New Cut River in Ipswich with associated works to tie it into the new east and west bank walls and gates.

The flood defence scheme, which will reduce the risk of flooding to 1,608 homes and 422 businesses and support key infrastructure, has been partnership funded by: the Environment Agency, Ipswich Borough Council, Department for Communities and Local Government, the Haven Gateway Partnership, and the New Anglia Local Enterprise Partnership.

The barrier gate is expected to be operational in the spring of 2018.