Landguard Fort Felixstowe From Above

Landguard Fort Felixstowe From Above

One of the hidden jewels of Suffolk’s attractions has to be Landguard Fort in Felixstowe.

“Originally known as Langer Fort, the first fortifications from 1540 were a few earthworks and blockhouse, but it was James I of England who ordered the construction of a square fort with bulwarks at each corner.

In 1667 the Dutch landed a force of 2000 men on Felixstowe beach in front of (what is now called) Under Cliff road east and advanced on to the fort, but were repulsed by Nathaniel Darrel and his garrison of 400 musketeers of the Duke of York & Albany’s Maritime Regiment (the first English Marines) and 100 artillerymen with 54 cannon.

The fort was considered part of Essex in the 18th and 19th centuries; births and deaths within the garrison were recorded as ‘Landguard Fort, Essex’.

A new Fort battery was built in 1717, and a complete new fort on an adjoining site was started in 1745 to a pentagonal bastioned trace. New batteries were built in the 1750s and 1780, but the biggest change was in the 1870s where the interior barracks were rebuilt to a keep-like design, the river frontage was rebuilt with a new casemated battery covered by a very unusual caponier with a quarter sphere bomb proof nose. Several open bastions were enclosed, and a mock ravelin block constructed to house a submarine mining contingent. 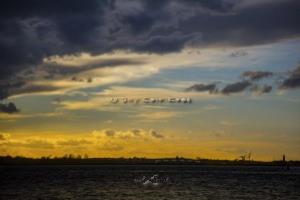 Landguard Fort sits on the banks of the Orwell

During the Second World War, it was used as one of the balloon launch sites of Operation Outward. This was a project to attack Germany by means of free-flying hydrogen balloons that carried incendiary devices or trailing steel wires (intended to damage power lines.) Between 1942 and 1944, many thousands of balloons were launched.

The 10inch gun pit in Left Battery was converted into an Anti-aircraft Operations Room for Harwich in 1939. The fort has been structurally consolidated and is open every day from April to the end of October. It is now in the guardianship of English Heritage.”

As the sun set on the port of Felixstowe we captured some aerial views of Languard Fort to give you a taster of what the hidden gem of Suffolk has to offer a visitor.

To find out how Sky Cam East can provide your aerial imaging needs, please contact us.

Aerial Photography, Drone, News, Suffolk, UAV
No Comments
Ipswich Flood Defences in the making We are asked by BBC Look East to provide some video of the...

Aerial Photography, Drone, News, UAV
No Comments
Foxhall Stadium Gets A Facelift The home of the Ipswich Witches Speedway Team and a major venue for Spedeworth...