Aerial Filming for ‘The Wives Did It’

Aerial Filming In Suffolk – For The Discovery Channel US

Sky Cam East were invited to provide the aerial filming for a program on The Discovery Channel.

Britespark Films of London are making the show entitled ‘The Wives Did It’ to be screened in the United States later in 2015. It is hoped UK viewers will see the show the following year. 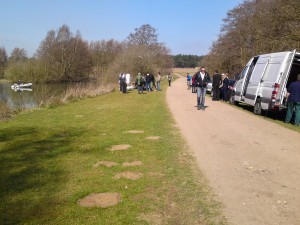 The prime location for the shoot was Bentwaters Park in Suffolk which itself is fast becoming something of a hub for film makers. The site was once the location of the US Air Force and during the cold war hosted inter-continental ballistic missiles carrying nuclear warheads. It is quite surreal to see the actual missile silos which remain to this day – albeit without weapons in them.

The site backs on to Rendlesham Forrest – the location of one the most famous UFO sightings in the world, which also involved the US Air Force. Much to our disappointment, the only aerial vehicle in sight was our UAV drone.

One of the aerial filming challenges was to shoot in the American NTSC format. This meant resetting all cameras, monitors and down-links to a format that is seldom used in the UK. This was partly due to the program makers requiring a frame rate of 29.997fps, unlike the usual UK PAL rate of 25fps. We shot at 60fps to allow post production to create smooth slow motion without any loss of quality.

Looking forward to seeing our work on the TV once again!